It is highly recommended that friends who are interested in this car come to the store to see it in person, turn on the “track mode”, the exhaust sound of the Haval H6S may attract you more than these pictures and text.

Click the “Track Mode” virtual button on the center display, and the sudden sound of the exhaust system is really chilling and goosebumps. It was a series of rapid and crisp “abrupt” sounds, and the volume was suddenly raised several gears, but no one had told me that this domestic coupe SUV was also equipped with a valve exhaust system. Needless to say, the sound is quite sensual – emotional fortitude, crisp sound – the throttle shakes and then pulls out a mechanical roar that spews heat, quite a bit of the metal style of a chariot band. What followed was also somewhat unexpected. The safety instructor sitting in the co-pilot chatted with me with a relaxed expression: “You can try the ejection function, step on two boards at the same time, use it, anyway, there is no limit to the number of times.” 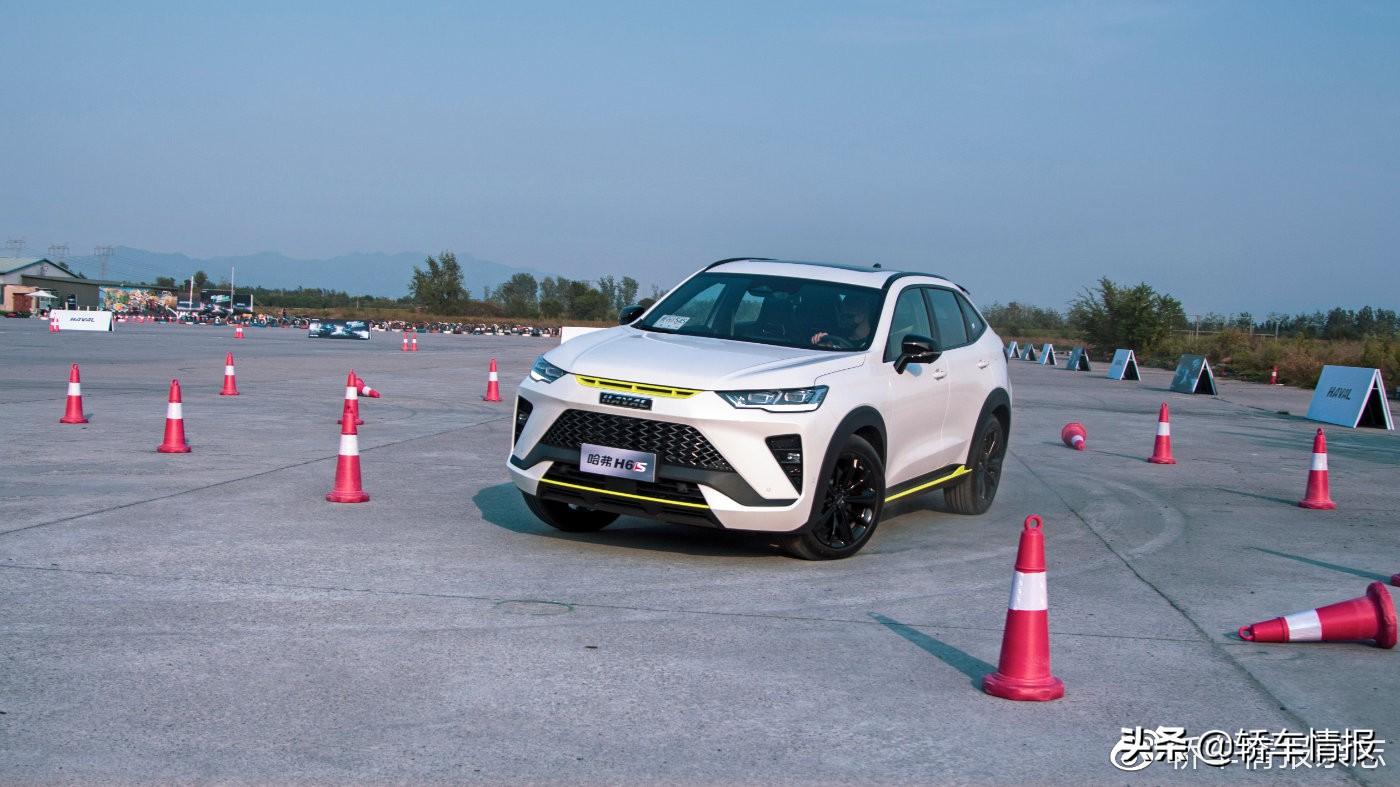 What the? Own brands have been so open in the development of sports models? Anyway, one meter in front of the car is the entrance to the track, since this is an SUV with a sporty label, the track in front of you is a rare opportunity for physical examination. 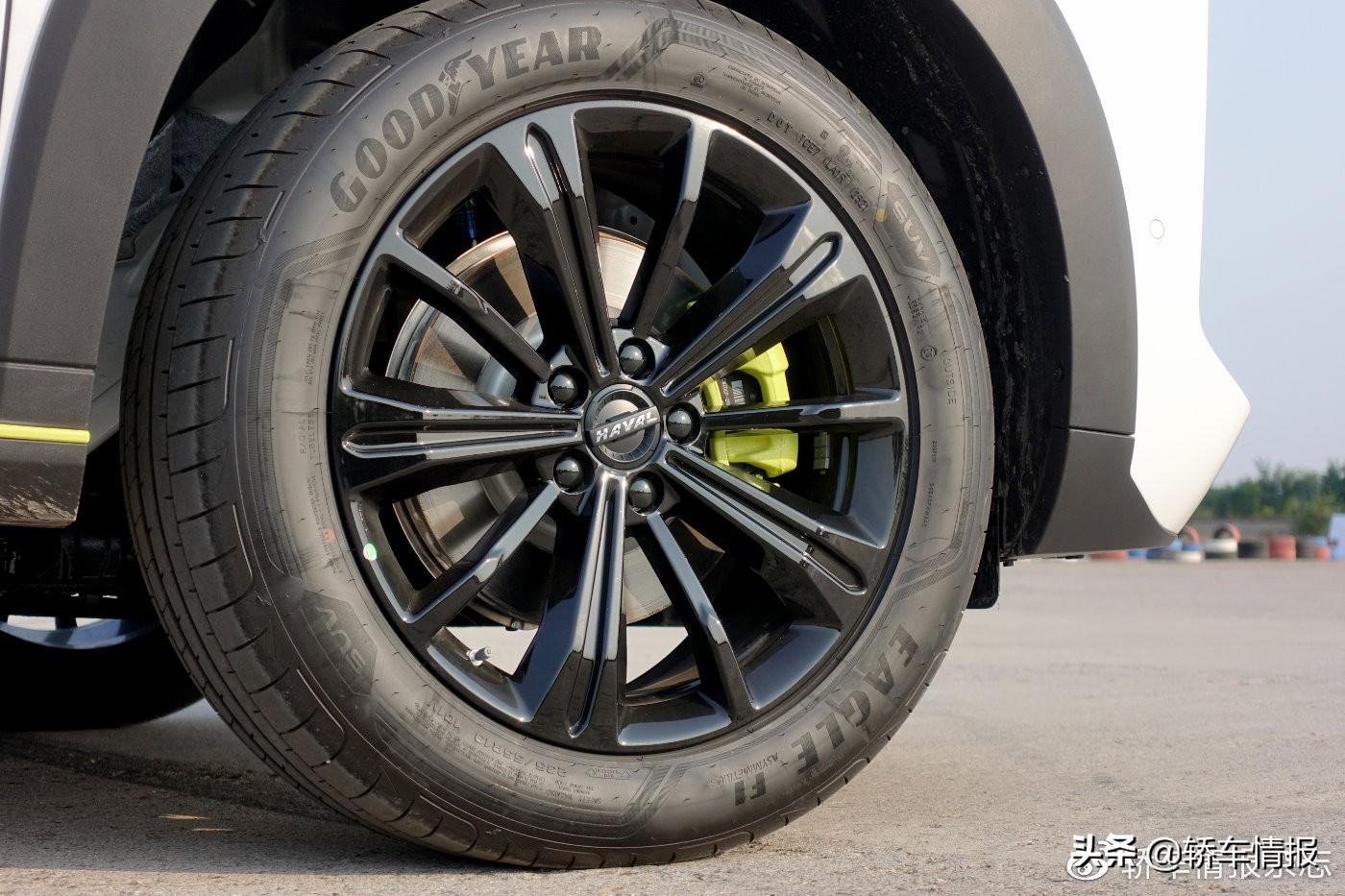 Guys, what I am testing is the first coupe SUV member of the Great Wall Haval H6 family, the Haval H6S. “We hope that the emergence of H6S will activate the image of H6 and show another side of H6 outside of daily life, and the naming ‘S’ not only represents ‘movement’, but also ‘Shift'”, I got the above information in the exchange with the H6S project staff. What he said by “switching” means that compared with the standard model of the third-generation H6, H6S represents the meaning of switching from “practical to performance” and from “travel tools to sports tide brands”, which can help car owners switch their life from “ordinary and stable to the pursuit of freedom”. 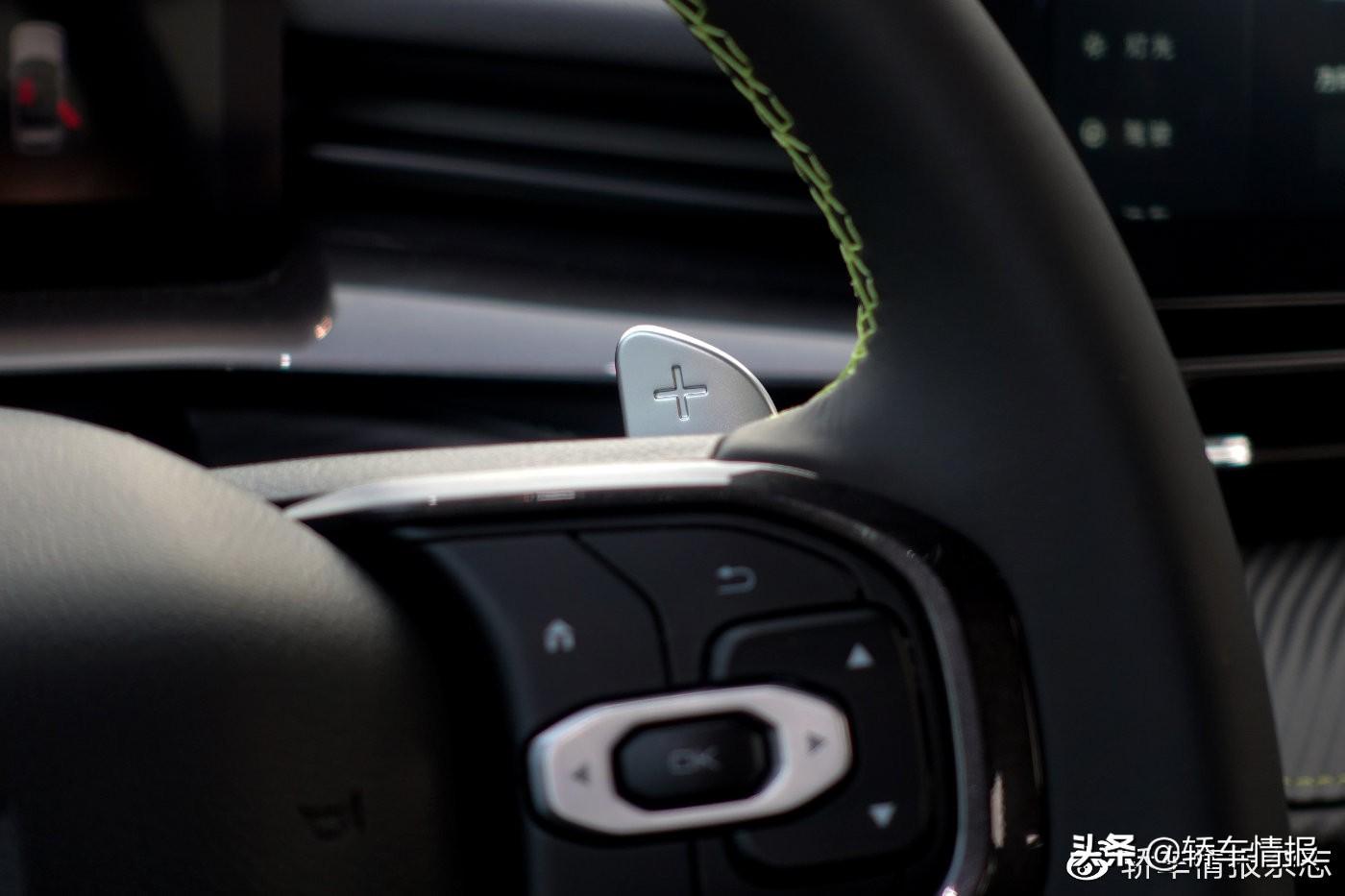 The concept sounds pretty good, and the first step in realizing it was naturally to develop a sporty coupe SUV look – as you can see from the pictures. The Haval H6S is available in a fuel version with a 2.0T engine and a hybrid version with a combination of a 1.5T engine and dual motors. Except for the rear nameplate, they look exactly the same. The design team said that the shape design of this new car comes from the concept of “Black Shark aesthetic design language”, in addition to using the D-pillar with a large inclination angle to express the unique roof line of the coupe SUV, the shape of the front, side skirts, rear reflectors and other details are inspired by the shark’s pectoral fin, dorsal fin and other physical features. The double spoiler design at the rear is obviously more decorative than functional, but it plays a big role in setting the atmosphere. Also as attractive as the small gift on the Christmas tree, and the “side skirt fin” that appears at the bottom of the rear door – let’s call it that, in short, a very cute design idea. 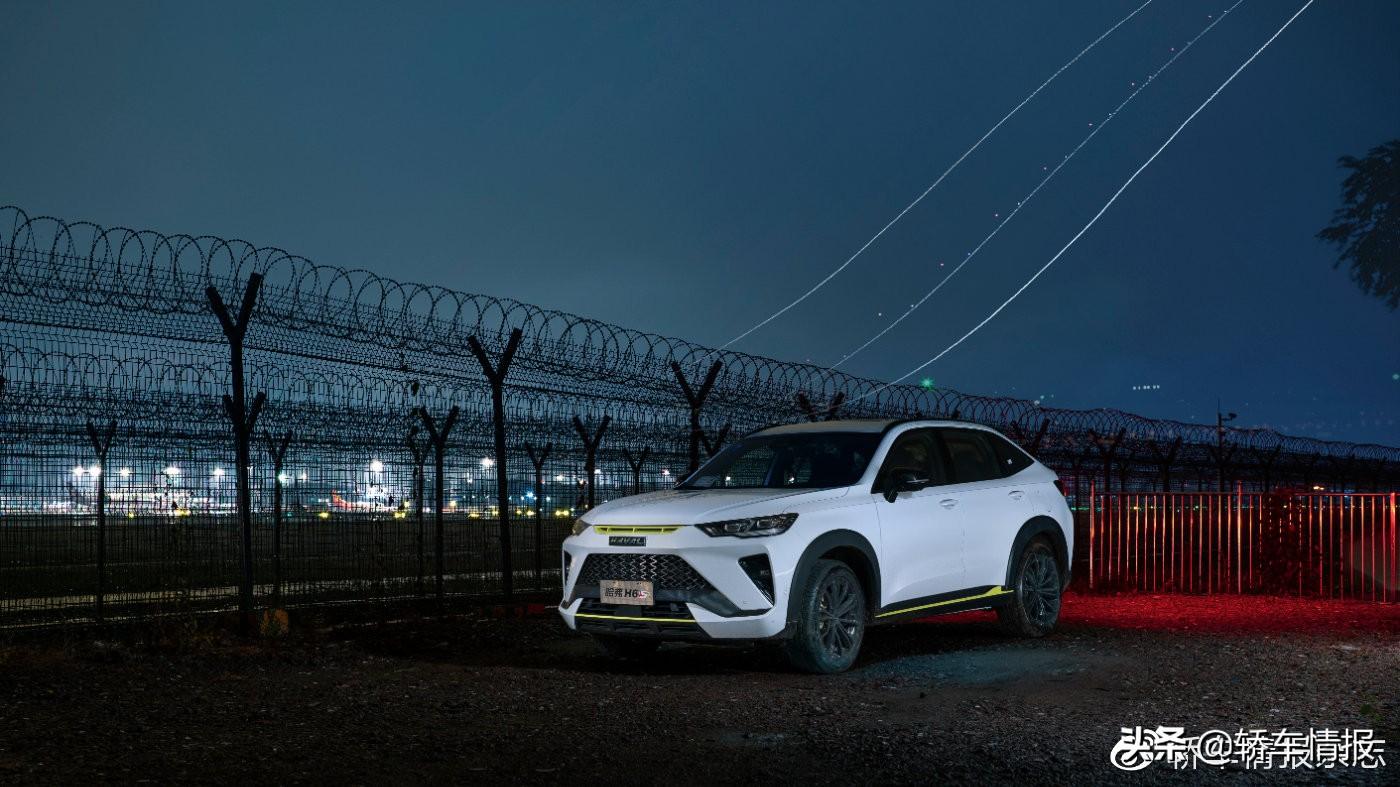 The narrow headlights and the large grille mounted on the wide front end make the H6S’s appearance look fierce, and the rear treatment is also very performance car. Haval also matched the H6S with different body and interior details according to the color of the body paint, such as this white car, which has bright yellow exterior lines and visually striking bright yellow seat belts. Overall, the new car should be very pleasing to young people, especially young customers who like to “tinker” when they buy a car back – although I insist that printing carbon patterns on some exterior plastic trim is still not mature. 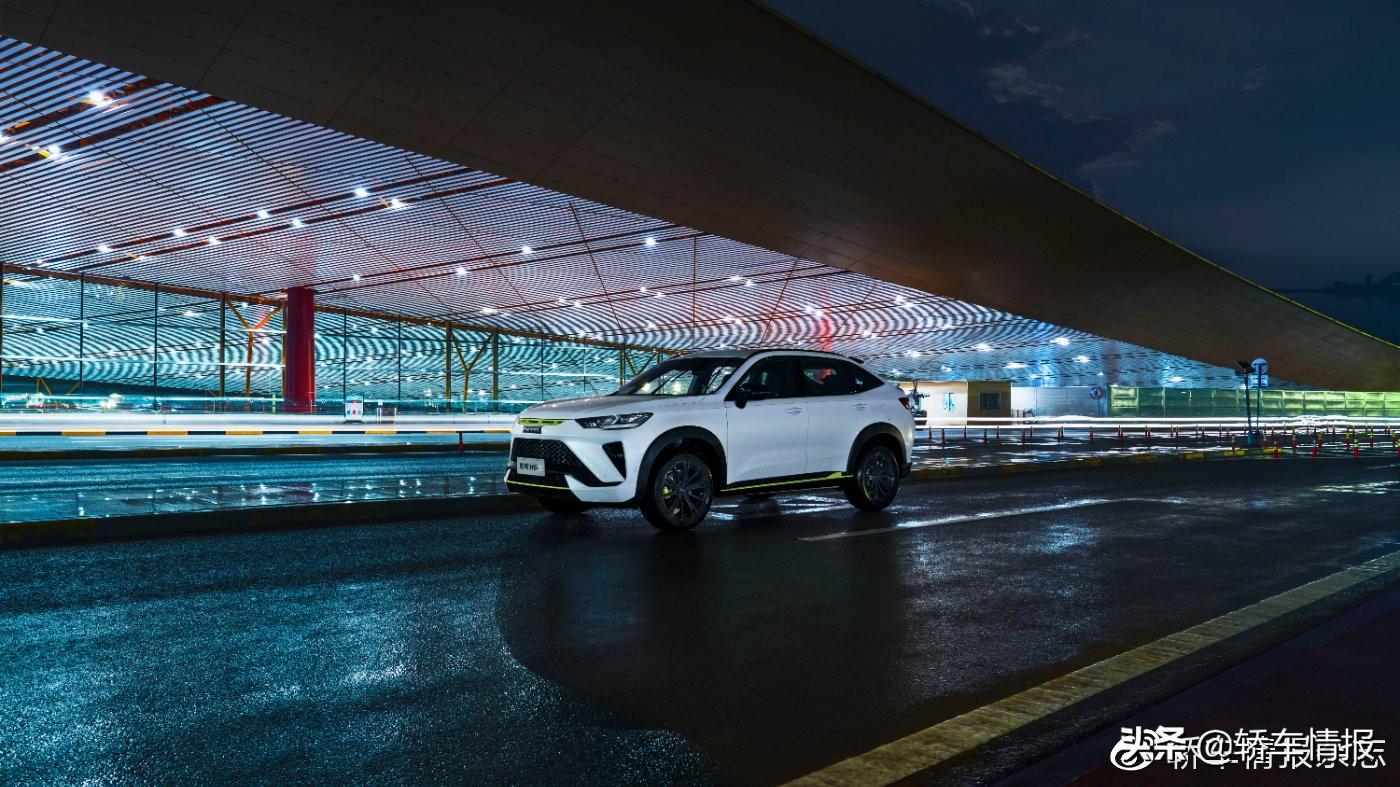 The wheelbase is 2738mm the same as the third-generation H6. To be honest, from the third-generation H6 to the H6S, the passenger compartment of this SUV has hardly lost any space and practicality, and the rear row is spacious from knees to overhead. If the trunk is not always stuffed to cover the rear windshield, its carrying capacity will not change in any way for the owner. Replacing the new car with a sports seat with an integrated backrest did cause some controversy within the design team, especially when it was decided that the rear seat should also be designed in the same way. This makes the H6S look more like a four-seater car, and the reduction of seat adjustable dimensions and the obstruction of the already reduced rear view is also a problem, but this is what you end up seeing when you buy a car – who cares? For a coupe SUV, it is enough to have a full atmosphere and harmony and beauty. Also responsible for the interior ambience is the all-black colour scheme and the patchwork of Alcantara and carbon fibre textured fabrics. In fact, the H6S’s one-piece backrest sports seat has excellent friction, so good that if you want to move your butt to adjust your sitting position, you will feel that your pants and clothes are being grabbed by the seat. The perfect combination of decorative and functional. 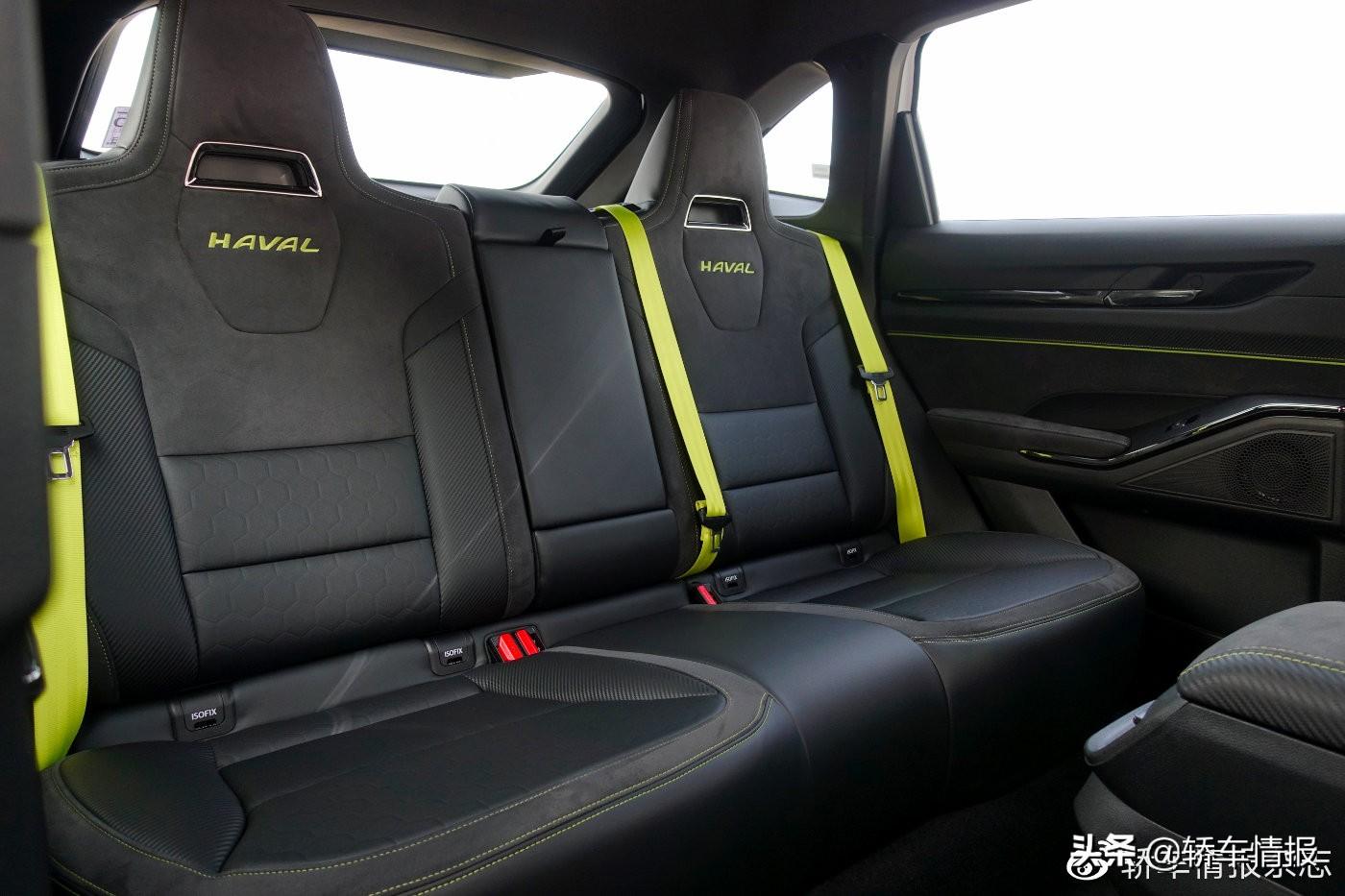 So, as the safety instructor said, I pressed two pedals at the same time, pulled up the rev, quickly raised my left foot, and the body jumped out. The H6S for the track driving experience is a front-wheel drive fuel model, and the 2.0T engine has the same model and parameters as the third-generation H6, with a maximum power of 155kW and a maximum torque of 325Nm. In addition to the ostentatious “sudden” sound of the exhaust pipe, the biggest move of this coupe SUV in “track mode” is to greatly delay the upshift timing of the 7-speed dual-clutch transmission in automatic mode. This allows the engine to release power without reservation, and the exhaust volume that doubles as the speed increases is quite exciting. 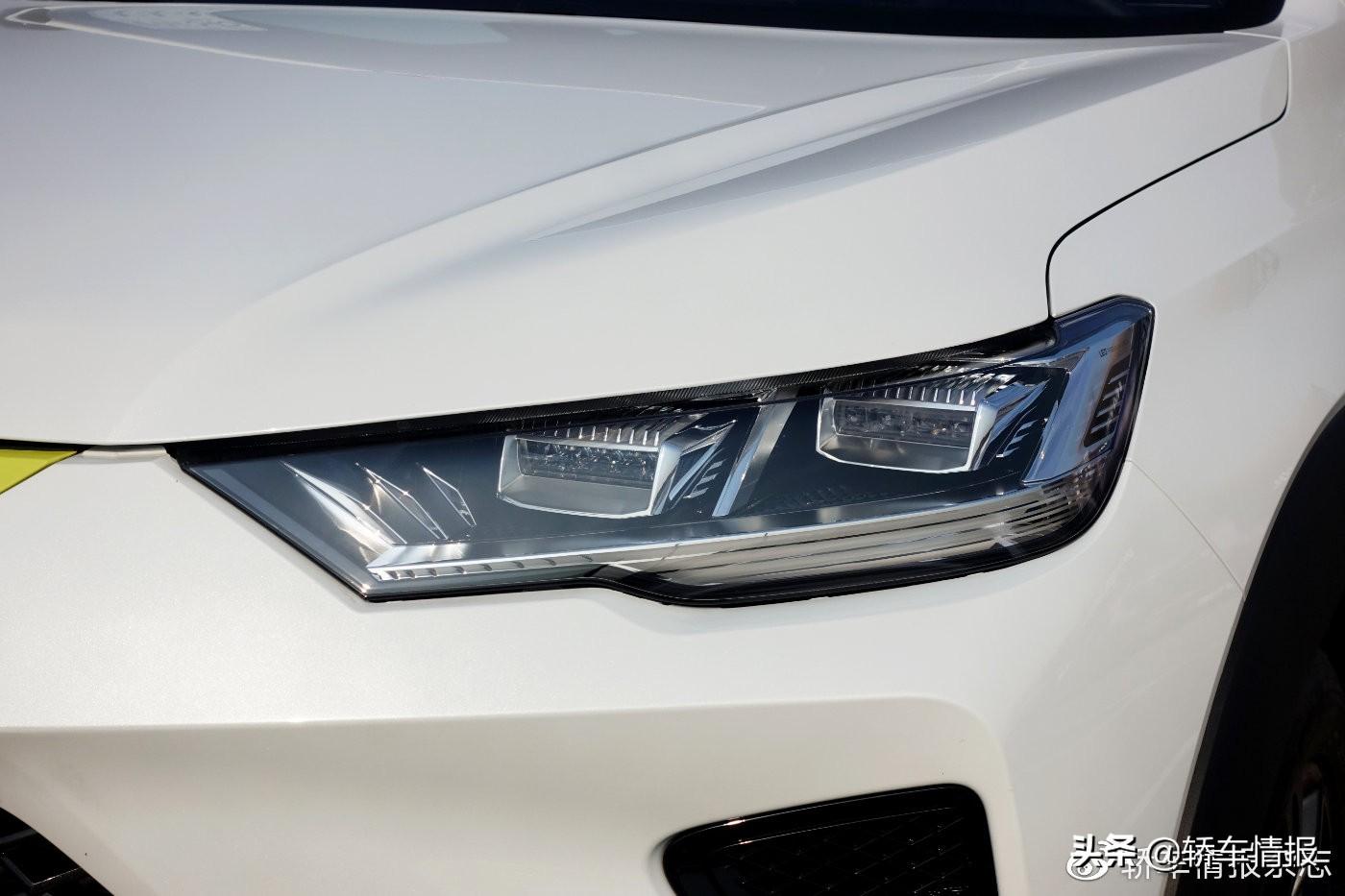 “Flower rack”? After all, the third-generation H6 is also equipped with paddle shifters, and the matter of pulling the speed is not exclusive to this new car. Brake vigorously before entering the corner, the whole braking system has sufficient braking power, the ABS starts earlier than expected, and you have to keep an eye on the critical point where the wheels lock in advance. After a few laps of rushing, the braking effect did not see significant attenuation. In fact, the project team opted for wider wheels for the H6S, and the tires were upgraded to the 235/55 R19 Goodyear EAGLE F1 series. I mean, although the engine and gearbox aren’t much different from the third-generation H6, the H6S has a sportier setup in chassis details. Its lower suspension lowers the center of mass of the vehicle by 10mm compared to the third-generation H6. Rematched front and rear stabilizer bars improve roll control when cornering. After replacing part of the chassis connection bushing, the stiffness of the steering system has also increased, and the direction control accuracy and sensitivity during rapid and sharp turns are higher than that of the third-generation H6. It seems that the project team does not only want to mean things on the surface when planning products. 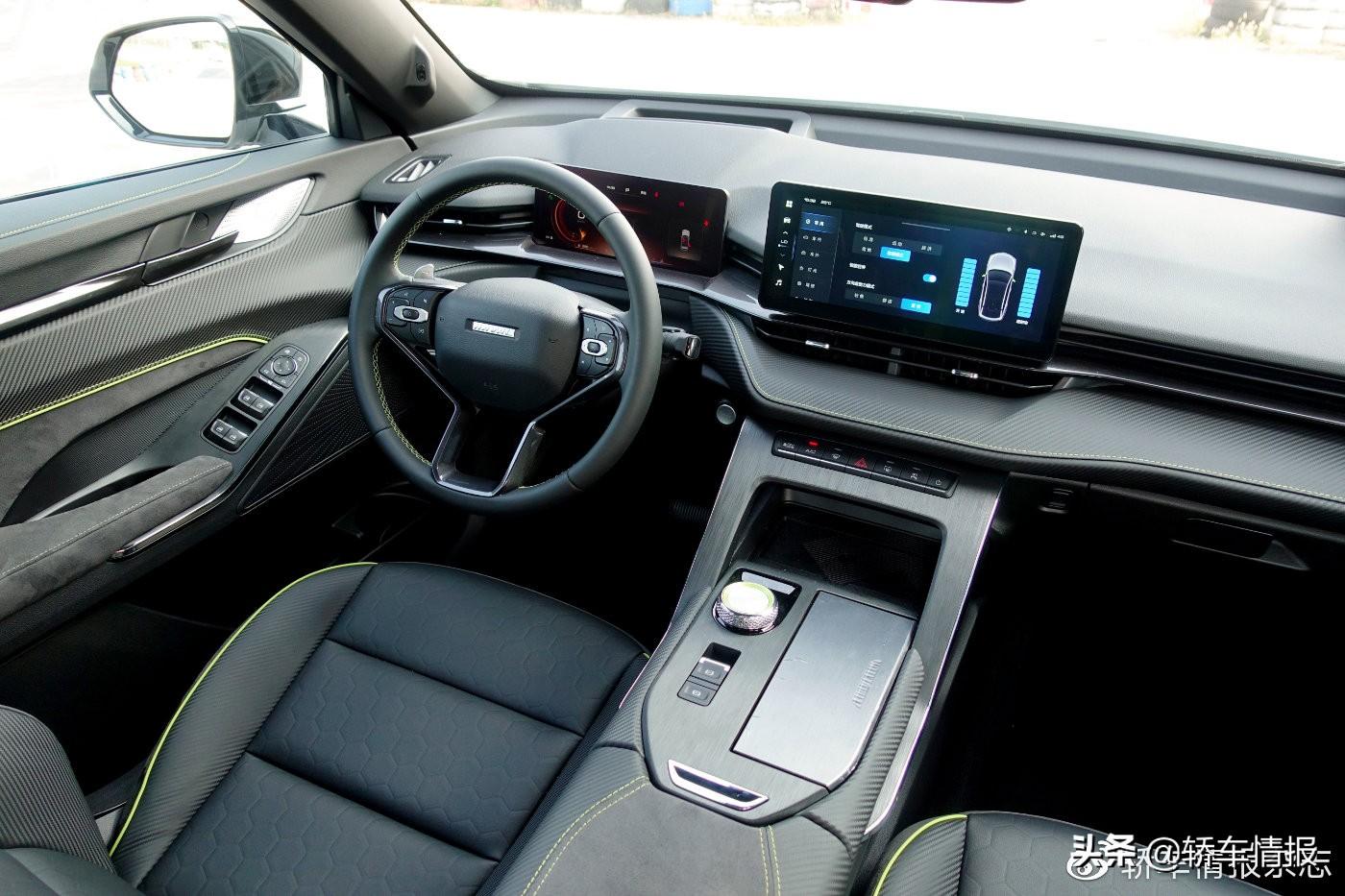 So, driving the H6S on the track is quite an exciting process. It is by no means the kind of soft-footed family SUV with a decent body stance for intense driving. As an SUV product, the front of the car reacts neatly when steering. The main thing is the sound, the moment the exhaust bypass valve is opened, it immediately brings people into an immersive sports experience. But that’s all the sporty experience in driving performance. Its cornering performance is more like a re-improvement of the third-generation H6, and the maintenance of body attitude in corners depends more on tire performance, and the strong understeer trend is difficult to really establish the confidence of “challenge”. There is also the gearbox, the delayed upshift timing is indeed a bit superficial – of course, this greatly enhances the atmosphere of sports driving – in terms of downshift strategy when braking vigorously and the choice of cornering gears and other details that really test sports tuning, the H6S still stays at the level of ordinary household products. 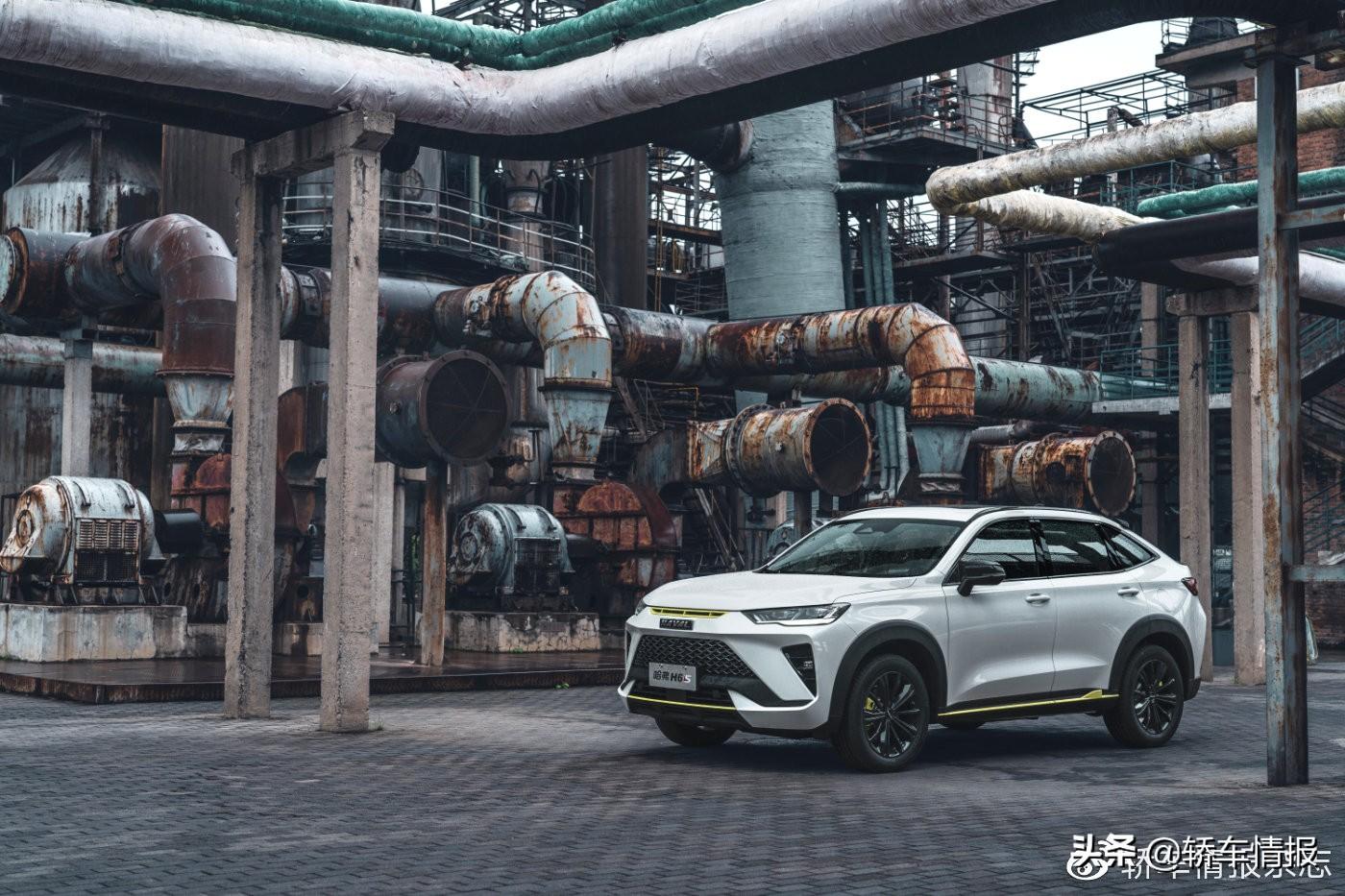 At the end of the day, it’s still a family SUV. Individual shapes and sporty interiors and chassis tuning allow it to find its own goals in a more segmented market. In fact, in addition to the track experience, we should pay more attention to the attributes of the H6S in family cars in weekday use. Its performance in intelligent driving assistance systems, safety performance and intelligent technology experience is the same as the easy-to-use and comprehensive third-generation Haval H6. The comprehensive fuel consumption reference value of the 2.0T fuel version is also the same as that of the third-generation H6, with a two-wheel drive model of 6.8L/100km and a four-wheel drive model of 7.3L/100km, using only 92-gauge gasoline. The hybrid version of the H6S does not have the powerful exhaust sound of “track mode”, but the power output of 179kW comprehensive power and 530Nm of comprehensive torque can provide a response far beyond conventional power in daily driving, and the comprehensive fuel consumption reference value of 4.9L/100km and NVH performance are also far better than that of fuel models. Want to “switch” your life with a car? The “Black Shark” H6S, which can be “suddenly” by opening the exhaust valve, may be able to help you, and it is only one or two thousand yuan more expensive than the third-generation H6.