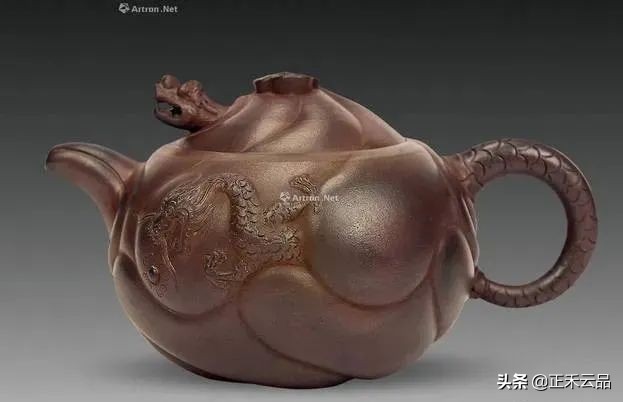 The fish -based dragon pot is also called “dragon pot”, “fish dragon pot”, and “fish dragon opera wave pot”, which contains the ideal of flying yellow Tengda and flat. According to historical records, Chen Zhongmei, a purple sand artist at the end of the Ming Dynasty, produced a “Dragon Opera Hai Tao” pot, but did not pass down from real logistics. Some experts believe that the “Dragon Opera Hai Tao” pot is “Fishya Dragon pot”, and Chen Zhongmei is the creator of the “fishy dragon pot”.

People from Wuyuan, Jiangxi, are unknown. At the end of the Ming Dynasty, the famous Yixing Zisha giant, originally made porcelain in Jingdezhen, and then made purple sand pottery from Yixing system. Chen Zhongmei is the first person to bring Jingdezhen’s craftsmanship into Yixing Zisha craftsmanship, which greatly affects the development of Yixing Zisha to a large extent. Even in the early Qing Dynasty, the prevalence of exporters in the early Qing Dynasty was very closely related to the Jingdezhen crafts brought by Chen Zhongmei. It was a very creative purple sand artist in the Ming Dynasty. He recorded his “good match with pot soil and creating all play, such as fragrant boxes, flower cups, furnaces, evil spirits, town paper, and heavy -duty engraving.

It was not until the Qing Dynasty Jiaqing, Daoguang, and Xianfeng period that after the careful design of Shao Taoism, the “fish -based dragon pot” became a mature and widely circulated classic pot type. Shao Taoy’s Fishya Dragon Pot is based on the theme of Fishya Dragon. It is decorated on the purple sand pot through auspicious patterns such as fishy dragon. Hai Tao is connected in an orderly manner in an orderly manner, giving a simple and beautiful connection pattern. The cover shows the waves of waves and waves. Not echoing, lifelike.

Cover: Tycoon Reference: The Hong Kong Tea High Museum Tibetan Dr. Luo Guixiang has a similar collection of collectibles in the old collection. Most of them are made of simplicity, and the fish -based dragon pot is unique. This pot is well -known for a long time. The pot is chopsticks, and the sand is warm and delicate. The pot surface is decorated with cloud wave patterns, vivid and smooth, and the texture stretches smoothly. The relief decoration of fish, dragons, and clouds is integrated with the pot body. The flowing, lid, and buttons of the pot are naturally structured, the faucet is free to retract, the form is plump and pretty, and there are double -piercing ears with copper soft littering beams on the front and back of the shoulders.

Whether the fishing dragon pot is the first to be created by Shao Tomado is not so important. What is important is that Shao Taohin created the two most exquisite fishy dragon pots that have been handed down.

This pot is finely selected, and the mud is maroon, which is extremely pure. Waves of sea water wavy, fluent lines, simple and bright. On one side of the pot body, the carbing carp spit beads in the waves; a dragon head extended in the waves on the other side, opened his mouth open, shook his ears, and spit out a treasure ball, and the charm was vivid. There is also a wave on the lid. The dragon head in the pot button is three -dimensional. The dragon head and agave can be moved. With the dragon tail, the dragon scales are all present, and the trend is out of the trend. The style of fish -based dragon pot is a masterpiece of Shao Tomber’s use of pattern changes. The shape of the six -petal cloud water patterns with extremely rules, a gentle body tube, full of round and round, changing the dullness of symmetrical patterns, making the moisture pattern rich in dynamic. The shape of the fishing dragon pot is from the tycoon. It is outstanding and elegant. This is one of the masterpieces of the tycoon.

In the late Qing Dynasty purple sand artist, Huang Yulin, who called the fisheries dragon fans, imitated the Shao Tycoon “Fishhua Dragon Pot”, but made a successful change. Later Standard style. Huang Yulin’s “Fishya Dragon pot”. It is really wonderful. The pot is made up of a ball -shaped ball, and the body is composed of a regular seawater wave pattern. The waves are lively and dynamic. In the tattoo waves, the faucet was revealed, and his eyes opened, like a spherical shape. On the other side, the carp jumped out, the head and end were tilted, and each other became interesting. 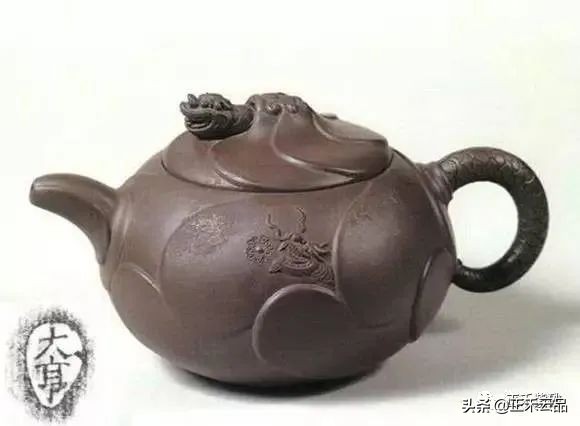 The shape of the pot is clever, and the decoration of fish, dragons, and clouds is integrated with the pot body

After Huang Yulin, Yu Guoliang, a purple sand artist in the late Qing Dynasty and the early Republic of China, was also good at making “fish -based dragon pots”, and the form was almost the same as that of Huang Yu scale. It is characterized by strong and powerful lines, exquisite and not cumbersome.

Guoliang is a master of Yixing Zisha pot. He has been hired to Suzhou Jinshi and calligrapher Wu Dacheng to make pots. The styles include “Hanjun Pot”, “Du Ding Pot”, “White Mud Pot”. At the end of the Qing Dynasty (1900), the Governor of Guangdong and Guangxi made a pot, and the printed models were “Tao Zhai” and “Baohua Tan”. Yu Guoliang wandered most of his life. In his later years, he settled in Mu Shi Village, Shushan, and became a husband and wife with the Widow Shao. During his lifetime, he said for himself when he worked for himself, “People are better for themselves.” This is a summary of the elderly’s experience in the world. 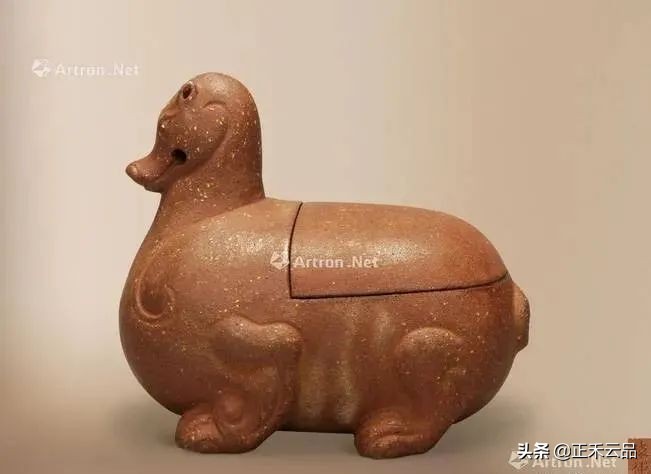 The small fish -based dragon pots made by Tang Shulin in the Republic of China are rolled clouds, shallow plastic waves, and the dragon in the waves extended the first part. This pot is made of red mud, the shape is small, and the workmanship is fine. The Qing Dynasty Shao Da Xiangyu Dragon made a layer of the wave pile, and the three -dimensional sense was strong, while the dragon dew in the waves did not see the claws.

This pot is used as a sea wavy cloud pattern with fluent lines, simple and bright. One side of the relief carp spit in the waves; a treasure pearl extended in the waves on the other side, and the charm was vivid. There is also a wave on the handle of the pot. The dragon head installed in the pot button can be moved. With the dragon pattern, it is integrated into one, and the rhythm is rigorous. The overall shape is outstanding, elegant, and superb. 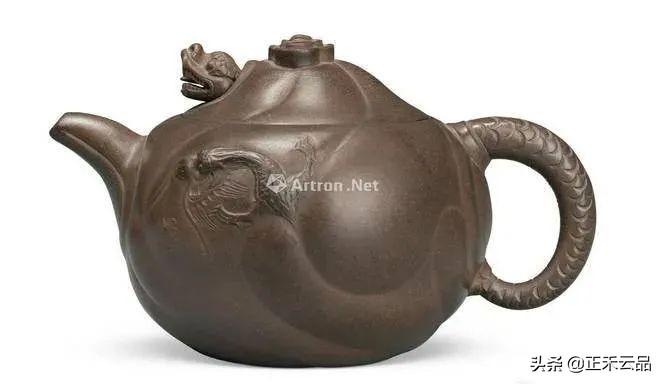 Following the Shao Tycoon, Huang Yulin, and Yu Guoliang, Fan Dasheng, a modern purple sand master, is the modern purple sand master Zhu Kexin, Wu Yungen, Shi Fusheng, Wang Yinxian, and He Daohong. The promoters played a positive role during various artistic periods. The characteristics of the fish -based dragon pots made by their own, and they all integrated their personal style on the basis of inheriting the tradition. 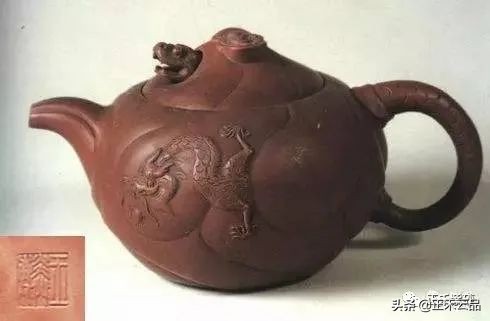 Wu Yungen (1892-1969), a famous master of Zixing in modern times, one of the seven old artists of Zisha, formerly known as Wu Zhilai, was from Shushan, Yixing. At the age of 14, he learned art from Wang Chunrong, a famous pot in Zisha. In the four years of the Republic of China (1915), he was recommended by Liyong Pottery Company of Dingshu Town. In the 18th year of the Republic of China, he was hired by the Ceramics Department of Nanjing Central University as a technician. , Won an excellent award. In 1954, he participated in Yixing Shushan Pottery Industry Production Cooperative, and was upgraded to Zisha Modeling Technical Counselor in 1956. Wu’s is hard -working and hard -working, learning and drilling, pure skills, good at making pots, known for flower goods. The work is dignified, simple and stable, and exquisite workmanship. The Wu family is familiar with the forming process, and it is refined to furnace the red furnace to furnish and add color pottery. 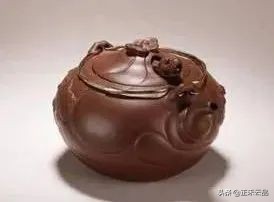 Feng Guilin (1902-1946), a native of Zhouteng Town, Yixing, is the first batch of artists in the “Liyong Pottery Followers” of the Lidao Equipment Factory in Jiangsu Province. It is a famous purple sand pot master in my country. He is very diligent, has no day, and has no moment of time. Feng Guilin has a wide variety of purple sand pots in his life, unique style, clever conception, and scholarship. He has a comprehensive technology, good -making purple sand pots, can be used in various purple sand pots, can be used by flowers and lights, accurate shapes, meticulous workmanship, uniform transportation lines, and naturally natural. This device is one of its masterpieces. 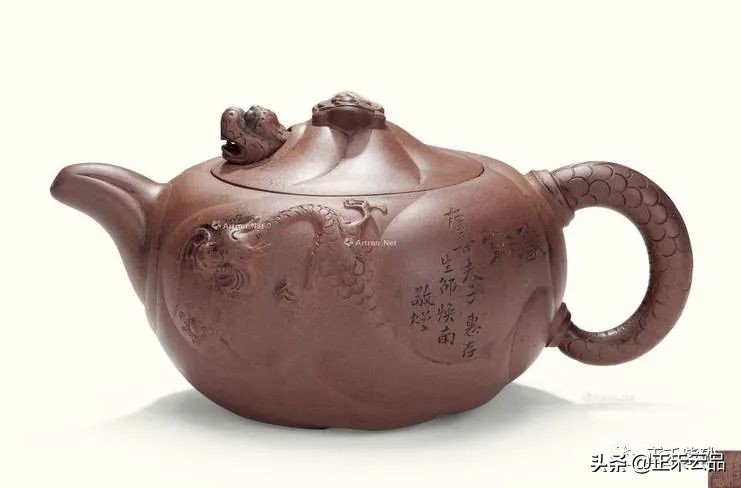 “Fishya Dragon” is a classic style in the purple sand pot type. This fish -based dragon pot is made of dark purple mud, and the body is made of a lover -like pattern. On the one hand, the Tenglong is engraved in the waves, the teeth are dancing, and the head spit the bead; It seems to be able to transform the dragon shape immediately. The pot is decorated with the dragon tail, and the auspicious clouds are decorated with a flexible dragon head. The whole work is superb, thick and simple, and the law should be consistently cherished by the majority of purple sand enthusiasts. 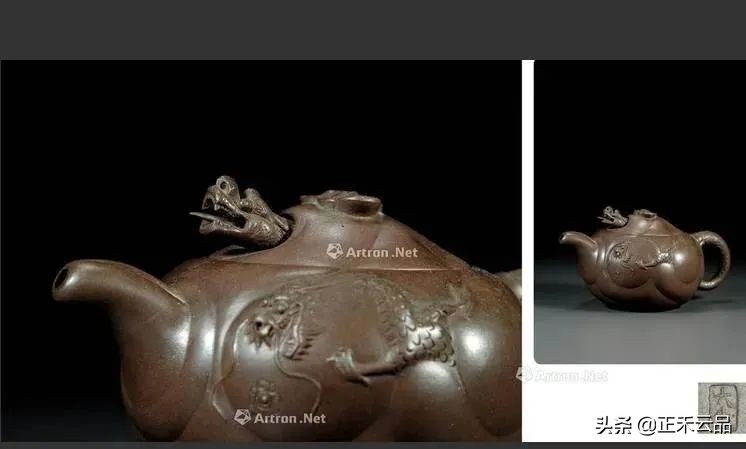 Fan Dasheng (1875-1942), a famous teacher of Zisha in the late Qing Dynasty and early Republic of China. Word rope Wu, No. Chengfu. At the age of 19, he studied art from Shi Zisha’s famous Gong Fanfan, diligently and studied, and specialized in research. The pots made, and the craftsmanship is absolutely competing to buy, and the “big raw pot” is well -known. In 1913, he was hired by Wynn Pottery Company and was invited by Tong Fei, the principal of Jiangsu Provincial Fifth Middle School in 1916. He served as the school’s pottery teacher for seven years. In 1935, he participated in the British “London International Art Exhibition” and won the Golden Award.