Yesterday, the most large -scale Chinese clothing conference hosted by the China Clothing Association was held in Jimo. For two days, more than 600 industry elites and related economists across the country gathered for thousands of years. The 12 parallel meetings and high -end forums will explore the prospects of the development of the Chinese clothing industry.

According to reports, Jimo, as a millennium merchant, has deep clothing cultural heritage. The number of textile and apparel companies has ranked first in the province’s county -level cities for many years. The latest published data shows that the annual online transaction volume of Jimo children’s clothing industry has exceeded 6 billion Yuan. The conference will further enhance the popularity of “Chinese knitted cities”.

There will be 12 parallel meetings and forums

Yesterday morning, the China Clothing Conference hosted by the China Clothing Association opened a new era of the national clothing industry in Jimo. This conference will release the annual viewpoint of the Chinese clothing industry this year, the co -conference of the Aoyama Bay China (Jimo) International Fashion Season Brand, and the “supply chain collaboration and product innovation”, “brand IPization production and content marketing”, “retail space and life The 12 parallel meetings and high -end forums with themes of theme of aesthetics have explored the dual overlapping period of the era of slow growth in the clothing industry and the era of consumer sovereignty. Where is the new demand and where new growth comes from? The problem. The well -known domestic economists will discuss topics such as establishing new thinking, opening up new worlds, creating a new world, creating a new curve, collaborative innovation, and new energy to release new energy.

The reporter learned that the theme of this conference with the theme of “link new kinetic energy coordinated and new supply” brought together more than 600 elites and cross -border experts in the country, including the well -known economists invited by the conference, Xu Xiaonianhe Miao Hongbing, chairman of Beijing White -collar Fashion Co., Ltd. and other entrepreneurs. This is also the most large -scale industry conference hosted by the China Clothing Association. It is the first time in Shandong Province. It is also the first time that it has been held in county -level cities. Jimo will become the vane of the country and even the global clothing fashion industry with the help of this meeting.

It is reported that the Qingdao Red Witzer Group conducted experience sharing of big data and model innovation at the meeting. The Paul Frank of the Red Textile Group, the Teddy Bear Treasure of the Skida Group, the Hongni Group Honny Hengni and other brands such as Qingdao and other companies A total of 5 high -end brands appeared collectively to show the audience’s future trends and different clothing design styles.

The reporter learned that with the opening of Qingdao’s local clothing brand “Pile” in the first concept store of Island City, it marks that companies have transformed in improving user experience. Han Rui’an, the image design director of the “Pile” concept store, introduced that as consumers ‘consumption habits change, consumption returns to rationality, and users’ demand for experience increases. When customers buy things, they actually pay attention to feelings, such as the texture of clothing and the sense of pleasure of trying clothes. These cannot be provided through the Internet. Therefore, it is an inevitable trend for clothing consumption to return from online. According to reports, the “Pile” concept store creates a brand that integrates international fashion and art. The store covers international new clothing, classical crafts, art galleries, beautiful students and coffee refreshments. brand. 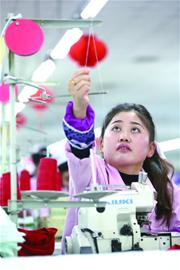 Xu Yongquan, Secretary of the Party Committee and Director of Jimo City Technology and Industrial Information Technology Bureau, introduced that as a “Chinese knitted city”, Jimo has been fully building the regional clothing industry. Through decades of accumulation and development, a heavy clothing culture has been formed. The brand influence in the clothing industry is getting stronger and stronger. As of the end of 2015, more than 2,800 textile clothing and apparel companies in Jimo, more than 230 companies above designated size, achieved an output value of 93.6 billion yuan.

The reporter learned that since 2012, Jimo City has hired a team of Chinese brand communication experts by government purchase services to formulate the strategic planning of the International Brand of Jimo Textile and Fashion Regional. Essence At the Shandong Textile and Clothing Exhibition Exhibition, which was held from May 25th to 27th last year, Jimo Specialized Organizing 9 core enterprises in the Children’s Clothing Alliance to participate in the exhibition. More than 300 latest children’s clothing products were displayed one by one, which attracted the attention of many exhibitors.

According to reports, Jimo City’s textile and apparel industry has a rich heritage and diverse resources. It is an important idea for Jimo City to promote industrial resources, cultivate regional advantages, and exert a combined effect. By combing the textile and apparel industry chain in the region, Jimo City integrates the four industrial resources of the mature clothing brand incubation centers, international clothing industry cities, market business, and clothing manufacturing. Marketing and manufacturing a large platform for comprehensive transformation and upgrading, so that the transformation and upgrading of the industry can be resourceful, synthesized, and systematic. At present, 15 successful clothing companies such as Minni Pitt have entered the Qingdao International Clothing Industry City, which have further enhanced the brand’s operating capabilities.

Xu Yongquan introduced that the development of Qingdao’s clothing industry has also realized a virtuous circle of manufacturing and market circulation. At present, Jimo City relies on the development of textiles and clothing industries, and is vigorously promoting Jimo International Trade City. Focus on the construction of Jimo Clothing Market, China Textiles and International Trade City, Jimo Small Commodity New City, Qingdao International Costume Industry City, Qingrong Intercity Railway Nobe North North North North In front of the business district and other key market business sectors, the 100 billion -level market business clusters with the characteristics of the fifth -generation and sixth generation markets are accelerating. In the future, it will bring huge tension to the development of industries such as Jimo clothing. Relying on the rapid development of the economy, on September 22, 2016, the Chinese Academy of Social Sciences released the “China County Economic Development Report (2016)” and the national top 100 county cases in Beijing. It is the only city in Jiangbei to enter the top 10 nationwide, and the other nine cities are Jiangsu and Zhejiang.

The reporter learned that Jimo City used the platform of the conference to discuss, share and operate wisdom in development, and operate the development of the local clothing industry through development trend discussions, successful experience sharing, and management of wisdom. The popularity of famous cities.