“I placed an order, and I chose a fresh professional dress for my wife.” On March 18th, Pinduoduo-Humen Women’s Ovementation Original Live Broadcasting Room, Huang Peimin, deputy mayor of Humen Town, Dongguan City, spent it as soon as he walked out of the live room. 87 yuan bought his wife for a professional dress. This time, he focused on the two major categories of professional clothing and large -size women’s clothing in the live broadcast. As of 16 pm, the live broadcast attracted a total of 4.36 million to watch. The first live broadcast mayor also received virtual gifts such as rockets and sports cars from netizens, and screamed in surprise. 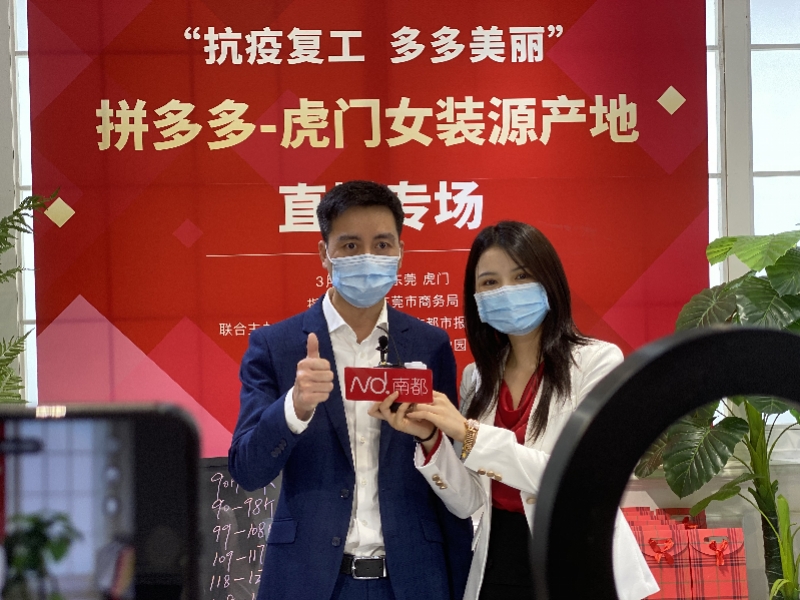 Teach you to choose

“The costumes produced by Humen are very close to the people while the quality is excellent and stylish.” At 15:00 pm, Huang Peimin, the deputy mayor of Humen Town, entered the live broadcast room of Pinduoduo, and explained to the camera to netizens. Many advantages.

What are the reasons for the high cost -effectiveness of Humen? Huang Peimin told netizens that the advantage is to rely on the entire industry chain of Humen clothing. According to reports, after years of development, Humen has formed a complete clothing industry chain, integrating R & D, design, sales, and services, which can achieve full -link production and sales, which greatly reduces the costs of clothing circulation.

As of 3:30 pm that day, Huang Peimin’s live broadcast hall attracted 4.36 million people to watch, of which more than 3.5 million were female users. In the women’s clothing professional live broadcast rankings on the day, the conversion rate of the town mayor’s appearance time period was among the best, especially when the female host told the mayor that the full set of professional clothes on her body was only 138 yuan, within 1 minute in 1 minute The number of orders for related products has increased by 150 orders. During the half -hour live broadcast of the mayor, the total number of professional clothes for the shop reached more than 2,000.

In addition to answering questions, Huang Peimin also invited netizens to start a business at the live broadcast room. It is understood that unlike other products, the costumes of clothing are extremely popular. In the e -commerce era, merchants and enterprises are required to respond rapidly. In Humen, one -stop such as R & D, drawing, drawing, pictures, and first single production can achieve rapid new and rich styles, which also attracts many young e -commerce practitioners.

In addition, for consumers’ specific needs for clothing during the resumption of work, Pinduang sets up the entrance of the relevant area for the professional installation of Humen.

One of the most outsiders in Humen clothing and clothing industry is the rapid development of e -commerce. Data show that in 2019, there are more than 8,000 enterprises and individual households engaged in e -commerce in the town of Humen Town. The online sales were approximately 47.8 billion yuan through third -party platforms, an increase of 8%year -on -year. The annual courier business volume is about 380 million votes, accounting for about a quarter of the courier business volume of Dongguan City. The average daily e -commerce express business volume exceeds 1 million votes.

The merchant is broadcasting the goods live.

The merchants have prepared spring goods many years ago, waiting for the sales peak after the resumption. In addition to white -collar workers and college students, the epidemic, entertainment, tourism and other industries that have greater demand have been affected by the impact of the epidemic in the industries such as catering, entertainment, and tourism.

Li Jiandong, who had done a 12 -year professional dress, found that the entire rhythm was completely disrupted by the epidemic, and the new models prepared before can no longer be done. The seasonal seasonality is strong and some inventory has been pressed. “We are also adjusting the marketing strategy. After the spring, the e -commerce platform is working on the work and re -production, giving the industry with a certain traffic support for the industry.” The relevant person in charge of Pinduoduo Hanhui Fashion Store told Nandu reporters that merchants followed the platform. At present, the live broadcast sales are good, far exceeding expectations.

In Wei Jianjun’s view, after the recovery of various industries, professional sales will rise. During this epidemic, Humen Professional Clothing used e -commerce platforms such as Pinduoduo to enhance the popularity through live broadcasting. “Let consumers think of professional clothes, and think of Humen.”

“Through the live exhibition hall, MCN content production, large data analysis and other models, the company’s exhibition needs and users are combined with the needs of users, helping to distribute industrial belts across the country and powerful enterprises, connecting 585 million users of the platform 585 million users , Improve the efficiency of enterprise production and commodity circulation. “Li Ding, the relevant person in charge of Pinduoduo, said that Pinduoduo chose a cooperative industrial belt and has a mature upstream and downstream supply chain. They can quickly establish channels by Pinduoduo to speed up brand building.

Another category recommended by the mayor is the large size women’s clothing in recent years. Huang Peimin said in an interview with Nandu reporters that starting in 2017, after the market analysis, some e -commerce companies switched to large -size women’s clothing. 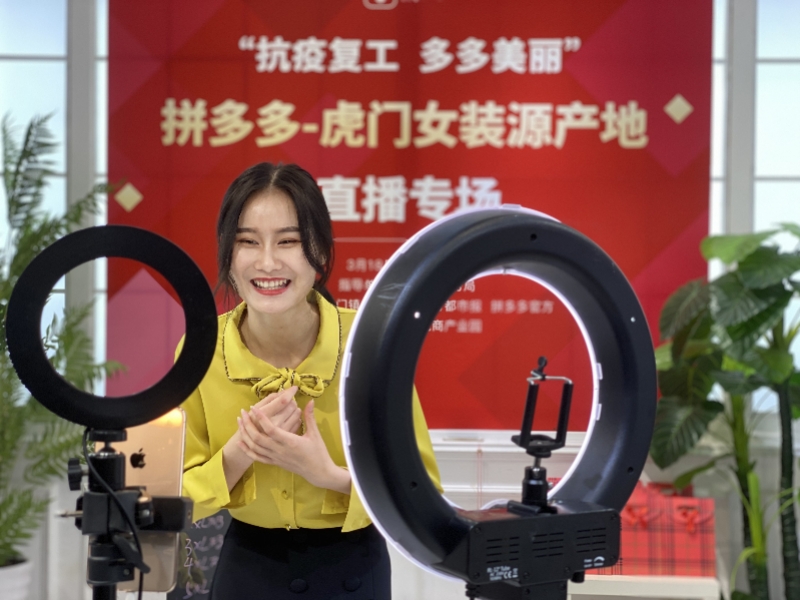 Huang Peimin also mentioned that according to incomplete statistics, at present, there are more than 10 companies with a sales of over 100 million or higher in the sale of Humen Large size, as well as a group of tens of millions of waist sellers. “Last year’s research and development, a group of Shenzhen, Guangzhou’s large -size sellers relocated the company and the operation department to Humen.” 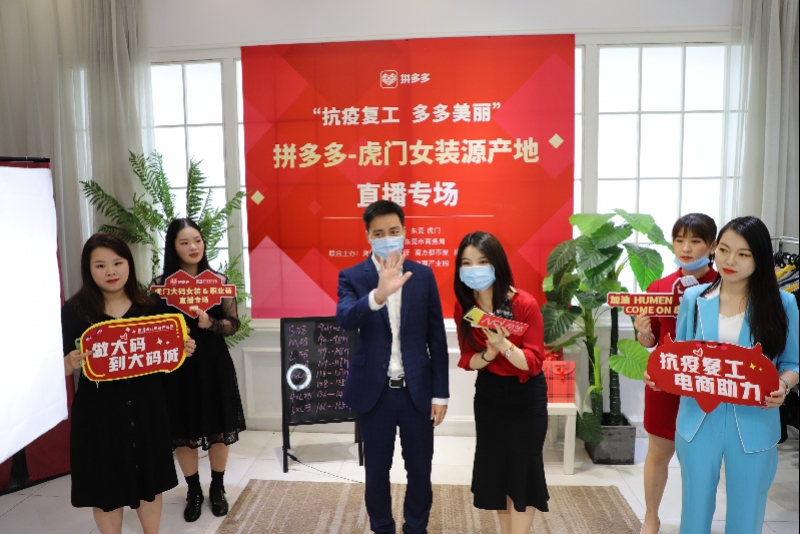 Netizens brushed the mayor of rockets, supercars and other gifts for the mayor.

Mr. Xiao is one of the waist sellers. The unit price of Pinduoduo store is 150-200 yuan, and the annual sales of about 50 million. A few years ago, he had more than 3,000 new spring products. After the courier resumes, the delivery began at the end of February, and the impact of the epidemic was small. Sales data show that old customers account for 40%, and new customers account for 60%, which is not much different from usual.

“Our e -commerce industrial park has begun to find parking spaces in March.” Wei Jianjun told Nandu reporters that there are more than 300 e -commerce companies in the park, including head sellers with annual sales of more than 300 million. During the conversation with the enterprise, it was found that with the economic driving of the reunion and the e -commerce platform’s house, the business in March was better every day.

Nandu reporters saw in Humen E -commerce Industrial Park that most stores have opened, and some stores are placed on live broadcast racks. The newly broadcast the anchor, the younger sister changed back to her clothes, ready to rush to the next live broadcast. Wei Jianjun mentioned that the live broadcast is a necessary way to bring the goods in the middle waist enterprise in the park. And in 2016, I tried live broadcast and entered the outbreak last year.

In addition, during the epidemic, offline demand turned to online and cultivated user online shopping habits. At present, some companies have feedback in March’s sales data higher than the same period last year.

It is worth noting that, as a dark horse running out of the Humen clothing industry, the town government will make large size women’s clothing into another big ace outside the professional dress in the future. Huang Peimin said that Humen Large -size women’s clothing forms regional agglomerations and online large sellers of design, R & D and supply chain sectors in the e -commerce sector. Next, through the cooperation with E -commerce platforms such as Pinduoduo, it became a big brand.

After social consumption is restored, Humen Clothing will be referred to

What impact does the emergence of the epidemic have on the raw materials, workers, and sales channels of Humen clothing? 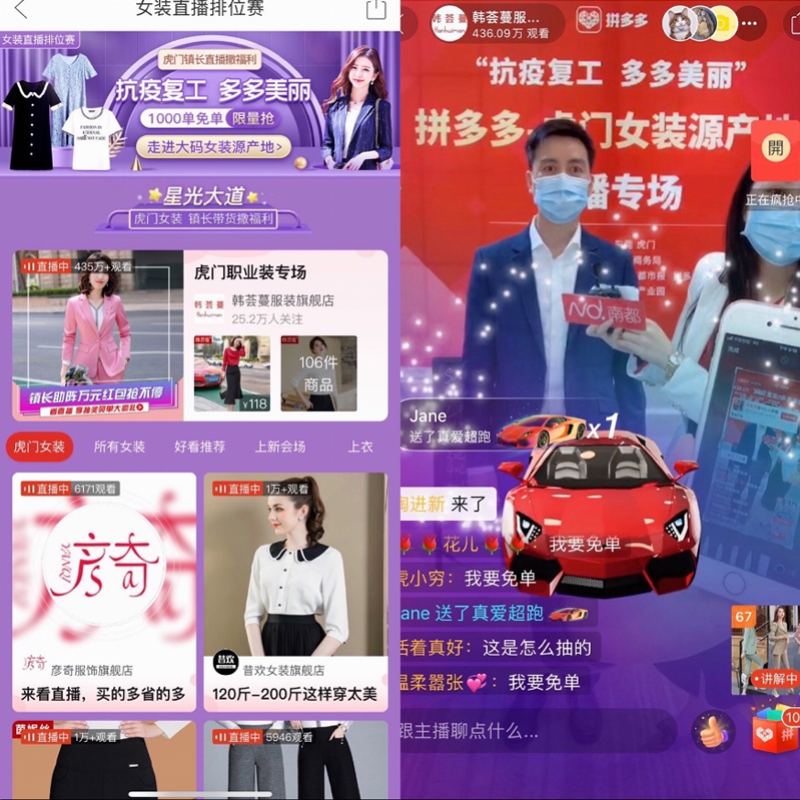 Huang Peimin: Most workers engaged in the clothing industry in Humen Town are mainly adjacent provinces such as Hunan and Jiangxi. Due to the large number of people who return home in the Spring Festival, and the region is close to Hubei, many workers are still stranded in their hometown, and the labor force has not fully recovered. Although offline consumption is affected, online restrictions can be broken, especially in the sales of e -commerce sales.

The rapid development of e -commerce has brought new changes to the clothing industry. Is Humen clothing reducing a certain risk in this epidemic?

Huang Peimin: E -commerce has changed everyone’s consumption model. Regardless of clothing, consumer goods, meat and vegetables, and essential products of life. Due to the impact of the epidemic, it has been purchased online. The next two legs walking the business model, which reduces the risk of business operations. According to the preliminary survey of the re -work after the town, the uniforms that simply operate offline channels have been impacted very obvious, and companies with online channels are much better.

Huang Peimin: The operations of catering, hotels, shopping malls, entertainment and other places are indeed greatly affected. The sales of Humen professional clothing are inevitably impacted. But with the gradual improvement of the current epidemic prevention and control, the future recovery consumption will also come. Humen professional clothing has a deep foundation in the field of e -commerce itself. After social consumption is restored, it will definitely usher in a new outbreak period.

This time, the live broadcast and cargo were held with Pinduoduo. The traffic of high -quality merchants could exceed 4 million, and the effect was relatively obvious. We will continue to strengthen cooperation with domestic e -commerce platforms, taking this opportunity to resume work and re -production work, and guide enterprises to open new sales channels.

In addition to professional clothing, Humen Clothing has also emerged in the vertical category of e -commerce in recent years. “Large -size clothing” has emerged. It has a high industry influence on major e -commerce platforms. how?

After several years of development, Humen also occupied a considerable market share in the large size industry. According to incomplete statistics, there are currently more than 10 companies with annual sales of over 100 million yuan in Humen Large -size Line Stores, and there are also a large number of tens of millions of waist sellers. At present, Humen Large -size clothing e -commerce sector has initially formed two obvious regional gathering areas, “Design and R & D and Supply Chain Plate” and “online big seller”. Next, Humen will actively create a high -quality e -commerce brand in Humen E -commerce Industrial Park.